So today, I woke up early really excited because I was going to try my first recipe since I decided to blog about my experience.  I took my boy to school and went straight to the supermarket and do my grocery shopping.  As usual for me to find everything I need for the next couple of weeks that is healthy and vegan I had to go to three grocery stores, which two of them were at forty minutes away.  I was so excited that I even wanted to do a little splurge on a delicious vegan burger that one of my favorites super market cafeteria has.  Sadly, I was a little disappointed about today’s burger.  Due to the pass of the hurricane Maria 76 days ago, they were missing some ingredients including one of the best parts of the burger, the bun.  I wanted that burger so bad that I said it was okay and they could use the bread they wanted.  My burger was not the same, it was a little more dry and the bread made a huge difference on the burger, but I still enjoy it anyways because it was still good and it was what I had so, oh well. 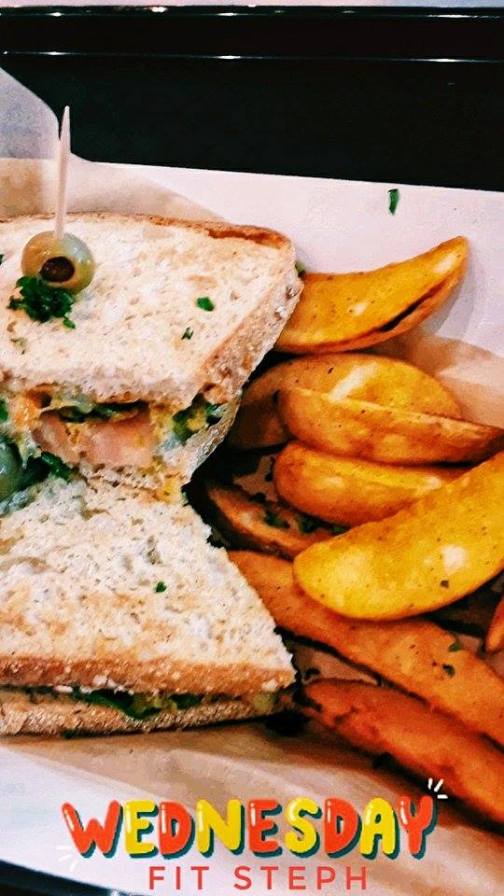 So I did my shopping and got home around noon, I organized the pantry and fridge a little to give space to my new foods and cleaned the kitchen to get ready to cook.  While I was at the grocery store I passed by the liquor section and saw a cheap white wine but I said to the hell with it and got it thinking what recipe I could make with white wine, I mean, who doesn’t love wine? Me selling a vegan recipe book with a wine recipe will definitely be something my readers would love right? So I am home still thinking what I could make, then I remember a recipe I used to love that had white wine in it, so I looked for the recipe and figure what ingredients I needed to change and which ones I could add.

I started to cook the recipe which was mushrooms with onions and peas, but then, the next question began “What I am going to eat this with?” I knew a salad was going to be there, but I needed something else,” um… rice… ohhh I know, smashed potatoes!” At first I thought about regular smashed potatoes but then I decided to go bold, which, it back fired.  See! I told you these things happen! (Read my first blog).  I usually used to add milk to my smash potatoes but because I am vegan I can’t use that milk.  Right when I was looking for my almond milk I saw this vegan coffee creamer that I got for the first time today,( can’t wait to taste it tomorrow), so I thought… “Uh, I should try to use the cream to see how it bonds with the smash” so there I went, I grab the creamer and add it to the smash potatoes.  I immediately noticed that it smelled weird but then I thought it might be because it was a coconut creamer and I had never used it, but then when the time to taste my smash potatoes came, I almost had a heart attack! I DID NOT LIKE IT AT ALL!!!!!!! What the hell was that, I mean I added garlic and onion powder and the creamer why is it so bad? Well, then I remember a very important thing, the creamer was hazelnut flavored! Lord did I mess the potatoes up. 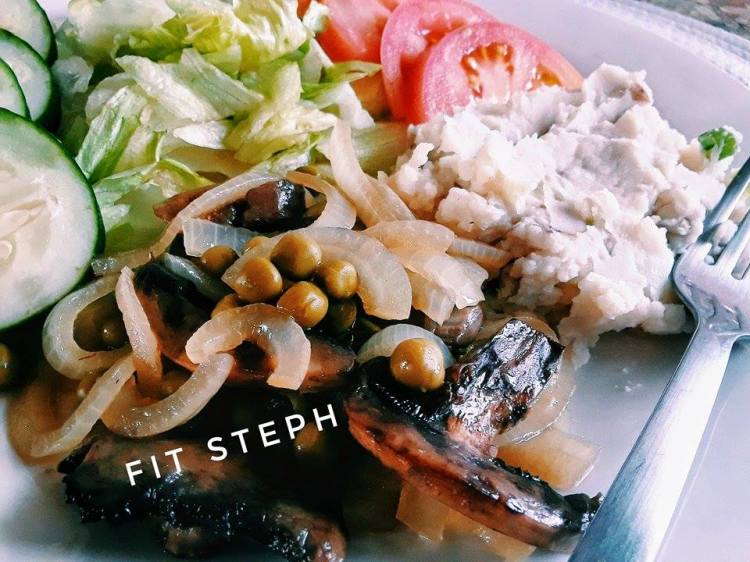 I keep my mouth shoot and still serve the potatoes to the boys but as expected, they did NOT like it and asked me if they could let the potatoes, of course I told them it was ok because not even I was going to eat that.  So there I went made a new bash of smash potatoes but went simple this time, bold smash potatoes for the next time ladies.  About the mushrooms though, they were delicious, boys love them and ate them all.  That recipe will definitely be on my book, it made me go back on time and feel that I was still eating as good as I used to, not to mention that those times where I used to eat the chicken version one was really a good time of my life, so it was a pretty good feeling.  I still don’t know what I want to cook for tomorrow, we run out of water today, surprise, surprise, so, all my pots are dirty lol, so fingers crossed that we will have water again tomorrow.  I do crave so avocado recipe so let’s see it I can find a avocado tomorrow or so.  I will definitely keep you posted tomorrow.

Alright girls, guys, whoever you are, let me know what you think about today’s mess, leave a comment and don’t be scare to share, I will love all of your support.  If you want to have sneaks peaks of what’s going on during my day, you can add me on social media, I usually use snapchat more, today I recorded part of my cooking process so you definitely want to add me.  You can find me on SC as @fitsteph29 or sle_lpz and on IG/FB/TWITTER as @fitsteph29

Thank you for spending this little time tonight with me!

Stephanie's Wellness is a online vegan magazine that helps ladies to create a healthy relationship with mind, body & food. Here I share information about wellness, mindset, nutrition, and health. I also give workouts ideas and tips. I love to share recipes ideas that are healthier than the usual ones. I also share everything you need to have a healthy mindset, how to create routines, how to stay motivated, how to talk to your self and more. Also the magazine supports animal's sanctuaries and rescues and will be donating $0.25 from every issue sold to these places. Join the free FB Group: Stephanie's Wellness Community FB: @stephanieswellnessmag IG: @stephanieswellnessdotcom Follow Founder Stephanie IG: @iamstephaniellopez View more posts

This site uses Akismet to reduce spam. Learn how your comment data is processed.